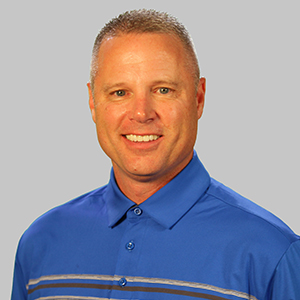 Troy Hilton joined the NABC staff in the fall of 1992 as a non-paid intern for the 1992-93 college basketball season.  Following that intern season, he joined the staff full-time as a marketing assistant to primarily work with the new marketing and sponsorship of the association.  Hilton was instrumental with the development of the first NABC Corporate Team sponsorship program including preparation of sponsorship proposals, event planning, and sponsorship fulfillment.  He also assisted with the planning and implementation of new NABC events including the NABC Fan Jam (now the NCAA Fan Fest), Issues Summit, Roast & Toast, and Coaches vs. Cancer Golf Challenge.

In 1997, Hilton was promoted to Director of Association Affairs and became the key staff contact for the annual NABC Convention including coordination of the convention schedule, housing, event/meeting planning, and clinics while maintaining a role in sponsorship fulfillment.  He also managed non-convention meetings, conference calls, information distribution, and a variety of special projects throughout the year.

In 2014, Hilton was named Senior Director of Association Affairs & Corporate Relations and also became the key staff contact with the NABC Corporate Team Program.  His responsibilities include overseeing sponsor relations and fulfillment as the NABC transitioned into a new marketing partnership with the NCAA and IMG (now Learfield IMG College).

Hilton also serves as a resource for many coaches through his work with the convention and as a staff liaison for many NABC groups including the NABC Board of Directors, Congress, Alumni, Assistant Coaches Committee, International Committee, and more.  He also works directly with a variety of key stakeholders in basketball including the NCAA, NBA, NBPA, USA Basketball, CBS/Turner Sports, Nike Basketball, Adidas Basketball, Ultimate Athletic Sportswear, and more.

In 2017, Hilton brokered an NABC partnership with Athletic Director U to conceive and develop the Collegiate Coaching Consortium, a two-part developmental program to prepare young coaches and athletic directors to lead successful Division I basketball programs.

During the 2018-19 season, Hilton negotiated and manages an NABC collaboration with Championship Productions to create the NABC Championship Basketball Clinics, a national series of on-court instructional basketball coaching clinics.

A 1990 graduate of Washburn University with a bachelor’s degree in business administration with an emphasis in marketing.  Prior to Washburn, Hilton graduated from Fort Scott Community College and attended the University of South Carolina-Aiken.  He played varsity baseball during college and was named all-Jayhawk Conference honorable mention as a sophomore and all-MIAA & all-District 5 honorable mention as a senior.  He was also on the honor roll at FSCC and the Dean’s Honor Roll at USC-Aiken.