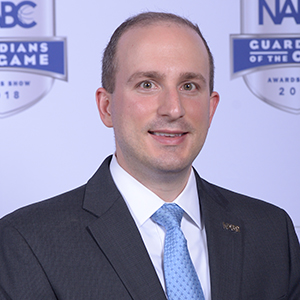 Eric Wieberg joined the NABC staff in May 2016. As Director of Communications and Digital Media, Eric leads all public and media relations efforts for the NABC including strategic messaging, press releases, media appearances, serving as a spokesman, member communication, and event media operations. He also provides strategic oversight of the NABC’s new media, content creation and brand marketing initiatives.

Eric supports the NABC’s advocacy work alongside various NABC committees in developing legislative proposals and policy positions for the NCAA and other governing bodies. Additionally, he manages the NABC’s awards program and oversees the NCAA Division I Men’s Basketball Regional Advisory Committee. Eric assists with the NABC’s sponsorship activation efforts and is a member of operational teams for various events including the Hall of Fame Classic and National Collegiate Basketball Hall of Fame Induction Celebration.

Before coming to the NABC, Eric spent two years leading football communications and digital media as an Assistant Commissioner at the Colonial Athletic Association, and three years managing communications, marketing and digital as an Assistant Commissioner at the South Atlantic Conference. Prior to those positions, he was an intern with the NCAA Division I men’s basketball staff, primarily serving media operations roles for the 2010 and 2011 NCAA Division I Men’s Basketball Championships. Wieberg holds a master’s degree from the University of Texas and a bachelor’s degree from the University of Kansas. He resides in Olathe, Kan. with his wife Katie and two daughters.